The blessing of blessing

My time in Houston has been so different from the other cities, but it's been so good!  The dynamics here are so different because the people don't really stay in one place. In other cities, I could go to a few parks and see the same people over and over and know that the parks were going to be full of people. But here, there are a lot of parks with nobody in them and I go to the same spots but don't see the same people. But today, God has been doing some cool stuff and putting me right where He wants me so that I can meet certain people.
This morning before I headed out, I went to the store to get something, and as I was pulling out of the parking lot I saw a guy sitting on the curb with a sign. He was in a part of town that I wouldn't have gone looking for people because I wouldn't have expected anyone to be there. But God knew where Bill was, and everything was just worked together. So I got to talk to Bill for a bit, pray with him, hear some of his story, and get him some coffee to keep him warm while he sat out in the cold to fly his sign.
Then after driving around downtown for a bit and giving out some sandwiches, I came to Starbucks and started Googling places that I could work next week. I wasn't here very long before a lady named Tanya came in and sat across from me. We started talking for a bit and she told me about her situation being homeless. So I took her out to my car and gave her whatever she needed out of the donated items. And I got to pray with her, too. Tanya has had a tough life with her children being taken away from her and sickness and she just got out of prison in December. But she really has the desire to get better and not go back to the destructive things that got her in trouble. She was really sweet and appreciative, and it was so great to just get to talk to her and pour love into her and provide for some of her needs. 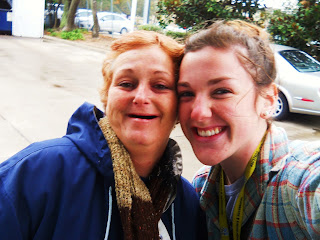 So it's been really cool how today God has brought me people in the unexpected areas. When I've gone out searching for people in Houston, I've found people, but I haven't gotten to really know any of them because they've been so reserved. But in the times that I'm not searching, God crosses my path with these beautiful, open people. I'm so blessed by the ability to bless others and be blessed just by getting to know them. And that's available to all of us! We're all invited to just go bless and be blessed, because we already are blessed by Jesus. So just accept His Blessing, and then accept His invitation to share it with others. It really is a blast!
Posted by Tori Long at 2:23 PM