This ain't the Bible belt!

My time in Denver so far has been different, but good! I've been volunteering at the Denver Rescue Mission serving lunch and helping in the kitchen. It's a really great Christ centered rescue mission! One of my first days going out on my own was tough. I went to a park that was pretty much a center for drug dealing. I've never been offered drugs so many times in a row in my life! That didn't really bother me, it was just a really dark area. When I started talking to people and giving them sandwiches, no body was interested in the Bible.  In every other city, when I offer people Bibles, their answer is either, "Yeah!" or "No, I already have one." So it was my first time encountering so people who weren't at all interested in the Bible and kind of seemed annoyed to be offered one. I didn't feel personally offended or rejected by that, but it was hard because it made me so sad to see people so shut off to God.  Here are some of the guys I met that day: 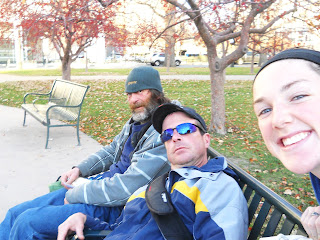 So the next day going out on my own after that started out really hard. Walking through the park, I felt so overwhelmed! I was in a park full of guys who had mostly been completely shut of to God or even receiving a Bible, and it was just a really spiritually dark place. So I walked through almost all of the park and I hadn't talked to anyone. I just felt so overwhelmed and intimidated and I felt like nobody would want me to talk to them. And then, once again, God made one of these precious people an angel on my path to keep me going. I had walked through almost the entire park, and then I saw Sham! I had met him the day before, and I just loved him! That day he had been the only bright spot in a dark day out. He pretty much stays to himself and doesn't like asking people for things. He had such a sweet, gentle spirit, and he let me into his little world a bit. I loved talking to Sham! So when I saw him right as I was about to just leave without talking to anyone, it completely turned my day around! When I see sweet, familiar faces out, it brings me such joy! It gives me a nudge to keep going. So I sat and talked with Sham for a while and God used him to completely revive my spirits and give me comfort and the courage to keep going. After I left Sham, I talked to every person I saw! God used him to totally change my attitude from one of intimidation to loving boldness! I talked to and fed and gave some clothes to everyone after him! And after that, nearly every person that I offered a Bible to wanted one! It was so amazing, and if God hadn't sent me Sham to flip my day around, I might have left the park without talking to or helping any of these people and they wouldn't have gotten Bibles. I'm just so thankful for the way that God can turn a day around. He can take us when we're overwhelmed, weak, and scared and use us to shine light in a dark area. And I love that he uses these precious children that are looked down upon by society and he uses them to minister to me more than a suited up ordained minister. Because I get to look into their eyes and see Jesus. If you read Matthew 25:31-46, Jesus says, "I was hungry and you gave me something to eat, I was thirsty and you gave me something to drink, I was a stranger and you invited me in, I needed clothes and you clothed me, I was sick and you looked after me, I was in prison and you came to visit me...whatever you did for one of the least of these brothers of mine, you did for me."  I wrote in my Bible next to this passage, "If you want to hang out with Jesus, go hang out with the least of these, look into their eyes, and see Him." And it's so true. If you feel distant from Jesus, go hang out with the poor and the needy. If you want to be more like Jesus, care about what He cares about. He cares about the poor, the orphans, the widows, the outcasts, the prostitutes, the liars, the alcoholics, the people in the streets, the people begging that might use the money you give them for food to buy drugs instead. God loves them! And He tells us to take care of them.
And I promise you, you'll never miss a cent or a jacket or a minute that you give away to the financially poor or poor in spirit. Being able to pour blessings on people and see it totally change their demeanor is the most beautiful thing I've ever experienced. I got to see this beautiful change in sweet Barbara the other day! She was sitting on a park bench and the only jacket she had was a really light windbreaker, and it's really cold, so she was shivering. I talked to her and gave her some jackets, socks, gloves, a hat, a scarf, a blanket (once again, I really cannot thank people who donate enough), some food and water, and I wrote down the name of some shelters for her to try. I just talked to her for while. She was so sweet, and it was amazing to see her change from a shivering woman with her head hanging down to a woman with a bright smile who would look into your eyes. And this change was caused by something so simple. And really, I think what blessed her most was when I hugged her. It was so sweet, it made her giggle! What blesses people most is love! Even if you don't have any money, food, or clothes to give to people, you can always give them your time, love, and a hug. Trust me, you'll be just as blessed if not way more! God loves these precious babies! And I am so beyond grateful that He has shared them with me. I'm so glad He gave me this wonderful gift of a job. It isn't a duty, it isn't a burden, it isn't a sacrifice. It's a beautiful, precious gift. I'm in love with my Papa and I'm in love with these people. Little ol' me gets the gift of all these beautiful babies. I really couldn't be happier. There's nothing else I'd rather be doing. And He wants to give this gift to you, you just have to open up to receive it! He invites all of His children to be a part of the gift the nonstop cycle of receiving and pouring out love. "Sacrifice" is the most fulfilling gift you could ever receive. 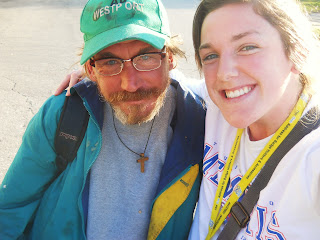