It was another great day in New Orleans! It was a little rainy and overcast all day, so there weren't as many people out as usual, but there still were plenty. Today was fun because Amanda, a member of my host family, joined me! This was the first time I'd had anyone go with me! So it was different, but it was really fun, and I love that she wanted to join me!
We started out in the same spot that I spent the most time at yesterday, but there was barely anyone there because of the rain. When we got to the end of a long walk way, we came across Kenneth! Kenneth was such a sweet blessing! When we offered him food and socks, he said, "Yes! I was just thinking how I need socks, God sent you to me!" We started talking to him, and asked if he had any friends around or knew where anyone would be, since we hadn't seen many people yet. He said yes and took us to a spot where some people were hanging out. So we went up with him and handed out sandwiches and talked with them. We met one lady named Parrish who is an awesome example of perseverance. She just moved into an apartment from living in a rescue mission, and she's working and doing well, which is so awesome to see! But she has been separated from her young son, so we got to pray with her because God loves restoring families. After we talked a while where they were hanging out, we took some of the guys back with me to my car so they could go through any of the stuff I had (like coats and blankets) and take what they needed.
It was awesome, because as we were walking to my car, I started talking to one of the guys, Nathan, who said he was from Nashville. We started talking about the city and he brought up the Bridge Ministry, and I told him about how I went there when I was in Nashville. Then I asked if he had been to East Nashville Cooperative Ministry,  and he said yes! And we talked about The Contributor, which is the homeless newspaper in Nashville and he told me that he used to sell them. It was crazy to meet someone in New Orleans who was from Nashville and had been to all the places I worked at. He actually just got to New Orleans recently and wants to go back to Nashville soon, so I might see him again next time I go to Nashville!
After the guys went through and got what they needed, most of them left, but Kenneth stayed a while and talked to us some more. Kenneth is so amazing! He told us some awesome stories about the way God has pursued him and provided for him. He talked about how he remembers being young, and saying to God, "If you want me, you can have me," and they've just grown together from there. He talked about how he was never really good with reading, but God's given him understanding for His word and has just revealed himself to Kenneth. The way God provides for Kenneth is awesome, and it's great to see how Kenneth credits that to God and not just coincidence. He talked about how as needs arise, God meets them. When he gets really hungry, he finds hot meals left out. When he starts to really need new clothes, he will find clothes in his size. Kenneth also loved talking about how powerful God's love is. And he's proof of that!
This is Jason, Mike, Nathan, and Kenneth! 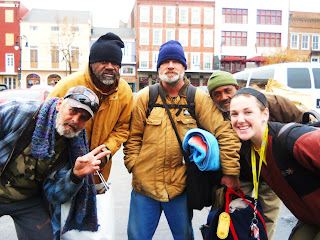 After we left that area, we handed out sandwiches to people staying under the interstate overpass. Going under the overpass was harder because most of the people there weren't doing well mentally. But God calls us to shine in the darkest of places, and I try to give those people all I can offer them. And really, the only thing I can give them that will last is Jesus. And He's what they really need. So I just pray that God will reveal Himself to these people through me and that Jesus will show His power and the true freedom that comes through Him to these people. And I trust that the Holy Spirit will grow any seeds that I plant in the hearts of these people. And I thank God for the way He longs to reveal Himself to us.
God is so good, and His children are so precious! It's amazing what He will show us and what He will do with our lives when, like Kenneth, we say to God, "You can have me."