There's been so much going on in San Antonio! It's so good, and I've met so many incredible people! My first day out, I was kind of freaked out, because the first few people I met were pretty aggressive. The first time I pulled up to a park, I had barely parked and a guy came up and started knocking on my window and pointing at the stuff in my car. It really startled me, but I guess he was really desperate! When I got out of my car and started giving him what he needed, as soon as he got his stuff, he walked away. At first I thought, "Oh no, it's going to be another city where nobody really wants to talk to me!" Which it's okay if people don't want to talk, I still want to be able to give them things they need. It just isn't as fun haha. But I soon met a ton of people that let me know not all of Texas is tight lipped!
One of the first people I met that I got to spend time with was John! He's quiet, but willing to talk to anybody that wants to talk to him. He's from Mexico, but he seems like a funny, sage old Chinese man to me! He reminds me of a combination of Mr. Miyagi and the cute Chinese man in Princess Diaries that is the first to laugh when Mia makes a mess at the dinner. That might be a strange description, but I think it fits him pretty well. John told me some stories about where he's from and some of his life experiences. He grew up catholic and actually lived in Rome for a while and was an intern at the Vatican, which I thought was pretty cool! John is just one of those people that you can enjoy your time with even if there aren't a lot of words spoken. 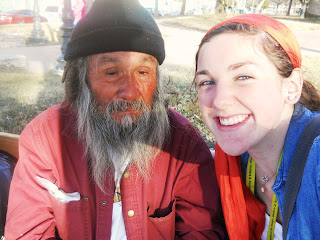 There was another park that I went to that was like a jackpot! I got out of my car and opened my trunk and within seconds, word spread through the whole park that some girl had sandwiches! I was bombarded with tons of people, I could barely pass things out quick enough! It was like a huge mob around my car, but it was an extremely happy, loving, thankful mob, not an angry one. I loved it! There was one group that came up for sandwiches of kids about 18-24 years old. They really peaked my interest, because usually I only see older men and women. So I told them I would come over and hang out with them as soon as I was done passing stuff out. When I got to them, I asked them what their story was, because I usually don't see young people out. They were travelling kids! It was so funny to me, because if I had met them a year or more ago, I would have jumped right in and joined them! They had all just come from Mexico. A few of them came down on a random hippie bus that they just jumped on. They all hitch hike, and just travel around wherever they want to go, sleeping in parks or wherever they can find. I know lots of people tell me I'm a hippie, but they haven't met these kids.
This is Anthony, Jessie, some random guy that walked up right in time for the picture, Ryan, Rodrigo, and Spirit! And Spirit's dog, Frat Girl. They were funny little free spirits! 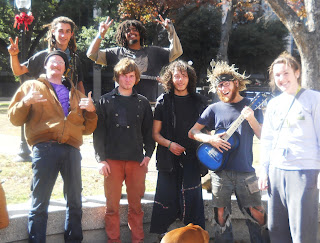 I met one lady yesterday named Brenda. She was so sweet, and had such a positive mentality. She talked about how even though her situation isn't ideal, she knows it could be worse, so she always thanks God for all that she has. She was such a great example of keeping your focus on the right thing. Spending time with these people makes me realize how silly and ridiculous the mindsets of so many average Americans are. So many of us stay so focused on how we look, what we're wearing, what we have. You guys, WE'RE ALIVE! Life is such a gift! It's beautiful and God can do so much with a surrendered life, but so often we get so caught up in stuff that really is so insignificant. If you allow your life to be revolved around the external- getting social status, financial security, and your peers' approval- all that junk that does not at all matter in the scheme of eternity, you will put such extreme limits on your life. So many of the people I meet on the streets are a lot better off than those of us with comforts and security, because they have their priorities straight. They don't have all the pointless distractions that we allow to take over our attention and our lives. And they know where their true security lies- not in their jobs, not in their larger than necessary homes, not in their cushioned bank accounts- but the fact that they have a Father God who looks at them as "not less than sparrows." He takes care of the birds that do not store up for themselves, how much more will He provide for us!
It just shows how easy it is to trust. So many of us have the desire to have that radical trust in God, but we can't let go of our illusion of control and security. But as soon as we realize that that's just what it is, an illusion, we can come into our full destiny that God has given to each of us. One that doesn't involve stress or worry or striving. He loves you! He cares about you! He's going to provide for you! And when you fully understand how great His love is, nothing else matters. You will know that even if all your external comforts and securities are taken away, it's okay, because you have the ultimate Comforter and the ultimate Security. The kind that actually lasts. The kind that actually satisfies.
This is Patty and Brenda! 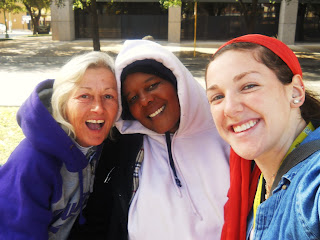 I spent a lot of time with Patty yesterday! She's been around so much corruption in the church, it's so sad to see. She's been so hurt by people that are really involved in churches that kind of live double lives, it breaks my heart to see that and the affects it has on people's idea of who God is. I really just poured God's truths into her and who God is and who she is in Him. I loved getting to spend time with her and taking her out to dinner and just pouring love into her and showing her God's pure love. Because she's seen so many misrepresentations of God and has been given such skewed examples of love. And people showing her twisted ideas of grace because they don't understand the freedom that Christ paid for them to have. But that is a hugs topic that I could go on and on about. It was really cool to see the way that by the end of our time together, her eyes had changed, and her attitude had changed. People just need to be shown God's pure love.
And I loved how through hearing about all that corruption, stuff that used to totally shake my idea of who God is and His goodness, I could know God is so good. I love that security that I have in God now that is totally a gift from Him. He's shown me so much of His love and His goodness, and I've experienced too much of His freedom for the twisted ideas and the falling of other people to affect my idea of who He is. Seeing what other people do can't affect who I know God is. It's so freeing.

Me and sweet Patty! 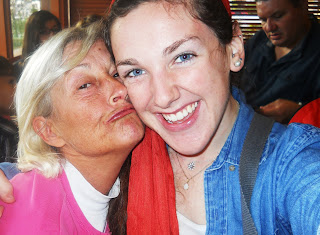