So far today I've gotten to see some new faces and some familiar faces. Yesterday when Amanda and I stopped to get lunch, I saw a guy who looked hungry ordering and he asked for the cheapest cup of ice he could have. So I went up to him and told him if he wanted some food, I would get it for him, and he did! He was really sweet and appreciative.
Today, I went out to the area I've been going to and I was handing out sandwiches. I got to one bench and started approaching the person sitting there, and as I got closer, I realized it was Hector, the guy I bought lunch for yesterday! It was so good to see him again, I love seeing familiar faces! And it was cool to get to talk to him for a while and get to know him. He actually has only been homeless for six months. He was in the movie industry and his business stopped doing well, and that's how he's ended up on the streets. He's a musician and songwriter and actually went on tour with Rage Against the Machine in 1993 and worked merchandise for them, which is pretty cool. His good friend was in their opening band, and occasionally he got to play percussion with them! He talked about how he's been so many different places in his life, from living in penthouses to on the streets. It just goes to show nothing in this world is really secure. But Hector is so awesome because he's so positive and determined to not lose the battle in the streets!
This is Hector! 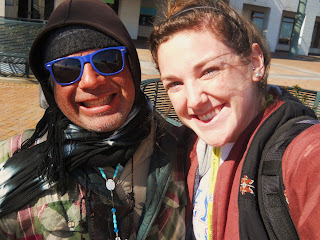 I also got to see Vernon again and a bunch of new friends! I'm having a great time in New Orleans, and I'm meeting so many awesome, talented people! I'm so excited for this loop, and I'm grateful for the great start it's had:)