It's been a while since I've written, and I'm home for the holidays right now, but I just thought I should catch up on what's been going on since my last entry!
My last day in Denver was amazing! It was my most joyful day there, everyone was so open, receptive, and happy to talk.
These guys were amazing! The four of us prayed together, and it was so beautiful. It was such a powerful time of prayer, it's indescribable! It was so cool how tangible God's presence was in the middle of this park full of drugs and darkness. But our God is so much more powerful than any of that and He can shine in the darkest places. 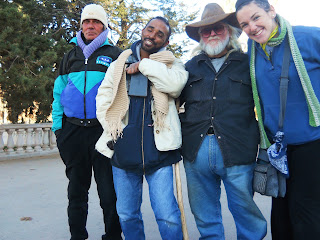 After hanging out, handing out things, and saying my goodbyes, I was starting to leave the park. I was kind of sad because I hadn't seen Sham since my second day out, and he was such a joy to me that I wanted to get to say bye to him. But he wasn't in his usual spot and I didn't know where else to look, so I just decided to leave. I was about to be out of the park when I heard, "Bye, Tori!" I turned around and it was Sham! I was so excited! It was just the perfect end to the perfect day. I just love Sham! It made my day that I got to see him before I left, and I love that he called me out!
This is sweet Sham! 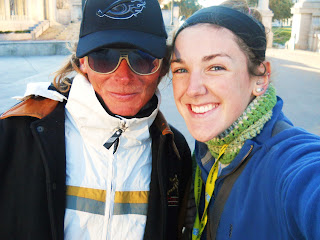 After my time in Denver, I got to go with a couple of friends to a four day conference in San Diego called School of Power and Love. The speakers were Dan Mohler, Todd White, and Tom Ruotolo. This conference was so amazing, if you ever get the opportunity to go, GO! Or just youtube Dan and Todd, they're so filled with God! The conference was all about knowing your identity in Christ and knowing that you're a son/daughter. It's not about works, it's all about knowing your Father and your intimacy with Him. The conference was so amazing. I got freedom there, I got to branch out, I witnessed miracles, heard amazing testimonies, and just got to know more of my Father's love. And it was so good to be in a room full of people just giving their all in worship to their Father. So amazing.
From there, I went to Omaha for Thanksgiving. Originally, I had planned on going out to the homeless while I was in Omaha, but I had a hard time finding anyone. Whether they just had a lot fewer, or if they were just all staying inside, I don't know. But my first day out, I only found two, and one that I talked to didn't want anything, and the other got on a bus before I could talk to him. The next day we walked around downtown as a family, and I didn't see anyone during that time. So I decided I would just spend the week spending time with my family, because my searches for homeless in Omaha weren't very fruitful, and I only see my family once a year.
It's also really cool how God's shown me that I don't need this work. I absolutely love it, don't get me wrong! But my worth to God doesn't depend on how many people I feed in a day. If he took this ministry away, I wouldn't be lost, because I have Him. He's all I need for significance. Being His daughter is all that matters. It's what's most important to him. Any ministry we are involved in should just be an overflow of our intimacy in Him. It should never replace it. We should never be defined by anything other than our adoption in Christ. That's so freeing!
After Omaha, I went to Chicago. My time in Chicago was cut short because I got really sick and came home  early. So now I am in Memphis for Christmas break! God is just continuing to show me things and draw me closer to Him. He's taught me so much through my time on LWAT, and He's teaching me still even as I'm home. It's just all about love. Without love, I am nothing. Without love, none of this matters. So just go love your Father and invite Him to open your eyes to deeper levels of love that are already yours through Christ. And love the person in front of you, no matter who it is. I hope everyone has an amazing Christmas! I can't wait to start back up the tour in January! God bless!