From Albuquerque to home!

I'm home! I got here last week and it's been so great to be back with my family and friends! I've been super busy so I'm just now getting to catch up, and a lot has been going on so this post could get pretty long!
My last post was on Albuquerque, so I'll catch up from there. My time there was so amazing and I met so many beautiful people! On my last day, I met this funny guy named Paul who had a little baby bird! Now before I go on with this story, I want to make sure you know that I am a huge animal lover and I can find cuteness in all things, so for me to think an animal is freaky looking, it's got to be pretty weird. Anyway, I started talking to Paul and he told me all about He-She (named that because he didn't know it's gender), the little bird he saved. He was in a park and he saw the little baby bird fall out of a tree and thought for sure the fall had killed it. But when he walked up to it he saw that it survived, so he decided to save it and nurse it back to health. When I met him, he had had the bird for two and a half days, and he was in love! He put the baby bird in his hat and would smuggle it in his jacket when he was going places where having a bird would be frowned upon. He also would mush up food and put it in a syringe to feed it. And he just thought this bird was the cutest little thing! At first I thought, "Oh my gosh, this is so cute! An adorable baby bird!" But then I actually got a good look at the thing. I don't know if you guys have seen a bird with pin feathers, but it's not cute. It's freaky. And this bird had pin feathers. And on top of that, it was a baby pidgeon. I don't really have a problem with pidgeons, but most people affectionately refer to them as "rats with wings" and apparently they carry all kinds of diseases. Now I really tried to think the bird was cute, but I couldn't. The fact was, this bird was just plain gross looking. But not to Paul. To Paul, this bird was adorable and lovable and worth saving. And he saw the bird for what it was going to be. What I saw was ugly half molted pin feathers, but Paul looked at those things and said, "You're gonna have some great wings! Yes, you are, you're feathers are gonna be beautiful!" And isn't that so like our Dad? When we were down and out, when we've fallen so hard most people wouldn't think we'd survive, our Father comes and saves us. He saves us when nobody else would find us worth saving. When we're ugle and gross and the lowest of lows, He calls us beautiful and lovely and HIS. And He loves us when we're at our least lovable state. When we're ugly and helpless, He doesn't look at us the way the world does. He sees as as what we're going to be. He sees in us what He wants to do in our hearts and where He's going to take us. He sees past our current situation or state of being. He sees us as His adorable, lovable, worthy of saving children. And I can't thank Him enough for that.
Meeting Paul really was such a blessing and a demonstration of our Father's love for us! And it was so sweet to see the way a grown man just turned into a little kid with such a loving, proud heart when he was with this baby bird! He loved it and he loved showing it off!
Here's Paul with He-She, imagining it as a full-feathered, flying bird! 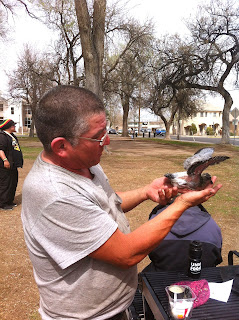 From Albuquerque I went to Oklahoma City. My time there was so great and stretching. I felt like I just got a deeper understanding of love while I was there. In a post a few months ago I talked about a conference called School of Power and Love that I went to. Well, one day when I was in Phoenix, I randomly decided to look up their schedule and "it just so happened" that there was going to be a school in Oklahoma City while I was already scheduled to be there! But I know there aren't coincidences with God! So while I was in Oklahoma City, I got to go to the School of Power and Love sessions, and in between some I got to head into the city and hang out with some of the sweet homeless men there. It was such a great time, it was like I had the best of both worlds! One of the times I went out, I took a friend from the conference with me. It was cool to get to have someone else come along and get to see how awesome these people are. I love getting to see walls and stereotypes come down, because in reality, no matter where we lay our head at night we're all just God's kids! It was also amazing the way most of the guys we talked to told us about their faith and the way that God is the one who gets them through. It's always so beautiful when the people that you go out to share hope with and minister to actually tell you about their hope and minister to you. God is amazing!
From Oklahoma City I went to Little Rock. I wasn't in Little Rock very long, because I wasn't really finding a lot of people, but the few I did meet were very sweet! And not finding a lot of people just meant that I got to be home in time for Easter!
So now I am in Memphis for the month of April, and my time home has been so great so far! God is just working out stuff that I wouldn't even think to ask for. He really does love taking care of His kids. He's the best Dad!
It didn't take long till I found sweeties in my home town to love! 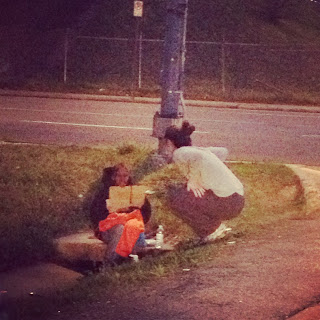 Today I got the awesome opportunity of being on Live at 9 news! It was such a fun experience! It was also super humbling. It made me realize how privelaged and blessed we are in America to have the freedom to openly and publicly talk about and worship Jesus. That's such a huge thing that we so often take for granted. To be able to have a conversation about God broadcast on a news channel and not fear for the safety of everyone involved is something that's unthought of in many countries. Being on the news today really opened my eyes to that and made me want to pray more for the people that don't have that freedom. It also makes me want to take full advantage of that freedom to let the world know how great my God is! People are shouting that from the rooftops in places where they will get martyred. How much more should we in the safety of America unashamedly proclaim the good news! Our God is a loving Father and when people come to Him, our family grows! So let's all spread the news so we can have more brothers and sisters:)
Here's us on the news set this morning! 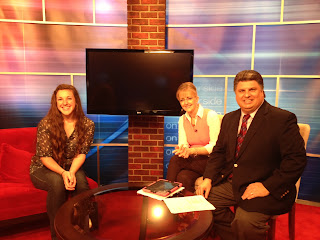 So my time home has been amazing and full of blessings already! I'm constantly amazed by the greatness of God. I also want to share with you about my awesome brother, Trevor! If you're ever praying for me, remember to lift him up as well. This Wednesday morning he will be leaving for London to be a part of Youth With a Mission (YWAM), a discipleship training school and outreach base, for about 2 years! I am so proud of him and I know God's going to do huge things through him! I'm so humbled by the fact that God wants to flow through every single one of us. There is noone that cannot be used by God in mighty ways, we just have to give Him our yes!﻿
﻿
Posted by Tori Long at 11:12 AM No comments: