It's another cloudy day in New Orleans! I came inside because it's raining, but I got to see a lot of people before the rain started, and I'm hoping it will clear up soon so I can go back out. But it has been a great day so far! I got to meet new people and see some familiar faces. One of the first guys I met today was James. He actually lost his job yesterday, so he doesn't know exactly where he wants to go from here. He's only been homeless for eight months and he tries to keep to himself most of the time. But he was happy to talk to me and we got to talk for a while. He talked about how God puts certain people in your life for a reason. I know that's true, I've met so many beautiful people on this trip who have taught me so much. Some of the most overlooked people have the most to share, and I've been so blessed that they've let me into their lives and have been willing to share their stories and their time with me. My life and my perspective has been so changed for the better by these people. The blessing they all are to me is overwhelming!
Another guy I met today, Ricky, was giving me a lot of suggestions of where to find people. He told me about one spot where there are a lot of young teenage homeless who train-hop. I'm hoping I'll get to meet some of them before I leave, but just knowing that there are people out here younger than me is crazy. The range of homeless people is so wide. There are young and old, people who work and people who don't, people who have been homeless for years and people who just became homeless, people who are mentally ill and people who are mentally healthier than a lot of people in homes, people who cling to Jesus and people who don't even know who He is despite the fact that they get food or shelter in churches. There really isn't one box that they all fit into despite our prejudices. So many of them are so ready to love, and they totally come alive when they are shown love. They really are beautiful people and I'm so glad I get the gift of getting to know so many.

This is Randy! He is SO beautiful inside and out and has such a sweet, gentle spirit. I met him the other day and I'm so glad our paths crossed again. I can't get across how sweet he is! He's definitely one who has captured my heart! If you look closely, you can see that the name on the jacket he's wearing says Angel. I think it's very fitting:) 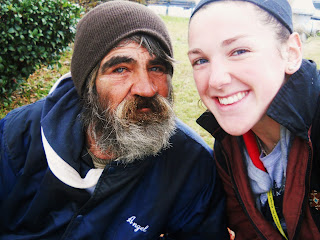 He's kind of shy, so I didn't know if he would be okay with taking a picture, so before I asked, I snapped one of him from behind. I also thought his jacket was cool (if you can't read it, above the cross it says "Once for all"). But here's Randy hanging out! 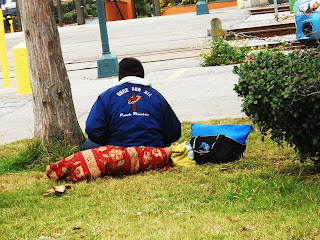