I've been so rocked by God today!  I started my day going to Bethel Atlanta, which was awesome!
After Bethel, I went to what's becoming my usual spot at the overpass. I handed out my sandwiches and Bibles and all the guys were really sweet again today. Then I got to talk to Shorty. You know how you always hear people say that when you serve people or minister to people, you always end up being the person that feels served and ministered to? My experience with Shorty was the epitome of that statement! I was SO blessed by him.
I walked up to Shorty and asked him if he wanted a sandwich, and at first he said no. But then he said, "Oh wait, yeah I'll take one! I remember you, your sandwiches are fresh!" So I gave him a sandwhich and sat down to talk to him and he just like unloaded God's word over me, it was insane. I'll try to remember everything he said, it was all so good!  He said, "Yeah, I feel you. You're a Christian, and you have been for a long time. You were raised in a Christian home, but it hasn't been until recently that you really have experienced God in your life.  And let me tell you something, don't try to rush things. Don't try to get everything done and rush everything. God took six days to make Creation. So don't get impatient with things, you're not going to get everything spiritual in a week." So that was so crazy, because I'd never had a conversation with him before, and everything he said was right on point. And with the wanting to get everything spiritual now, that's exactly what I've been dealing with lately. Like I want signs and wonders and every spiritualy gift to be evident in my life, and I've been wanting those things so badly, which isn't a bad thing, but I just need to rest in the fact that love is what's most important. Love is above all those things. None of those things matter if I don't have love, so I just need to keep on loving, and those things will come when God wants to give them to me. And I just have complete peace in that now. And when Shorty was done talking to me, he said how none of that was him speaking. He didn't know what he was going to say when he started talking to me, and he wouldn't have been able to recall the scriptures that he said to me any other time. But he just let God speak to me through him, and he trusted God to give him the words to say. Seriously, I went out to minister to these men, and I get hard core ministered to, it was crazy! Shorty blessed me so much!
He also talked about how sometimes when he talks to people, they say to him that if he's a Christian, he should have a home and a car, because God says he takes care of his children. But Shorty says that he is taken care of. He may not be content in the physical, but in his heart and mind, he's completely content and God completely takes care of him. And that's what God means when he promises to take care of His children. Shortys says that he doesn't need a house and a two car garage and a Mercedes to be content. He's thankful for where he is, because he feels like he can minister better in the situation that he's in now. How amazing is that that he's thankful for his homelessness because it gives him the opporunity to minister to those men? That's the true, sacrificial love of God in action!
As I was walking back to my car, I saw two guys that looked kind of angry. In order to be safe, I've been trying to only approach people that I don't think would be violent. These guys kind of looked like they could be dangerous, but they kept looking at me. And God told me to go ahead and talk to them, that it was ok. So I just smiled and asked if they were hungry, and huge smiles spread across their faces and they said yeah! So I gave them sandwiches, and it was just so awesome. They weren't looking at me out of anger, they were just looking at me because they desired that love, too. They weren't dangerous, they were just hungry.  And when I shared that love with them, their entire demeanors totally transformed. They went from hard, angry guys, to smiling softies just by being given some love, attention, and a sandwich. That's all it takes to transform a person! Well, really only love!
It was so amazing. God is so cool. After I got done talking with Shorty, first of all I was totally blown away! I had to kind of gain compusure before I went out again haha. But then I went and hung out some people who are a part of Occupy Atlanta. They were just really friendly and I got a lot of insight from them! And it was just cool to hang out with them and get to know some more of God's creation. When you decide to just love people with no judgement, it's so awesome.
So it's been another beautiful day of pouring out God's love and having it poured right back into me. Seriously,.living in God's love is the most fulfilling life you'll ever have, just surrender.

My occupy Atlanta friends, Mandy and Mike, and some of Mandy and her boyfriend's art: 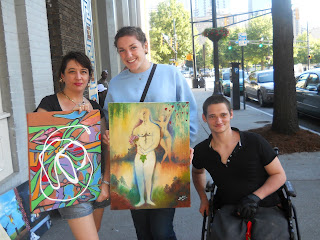 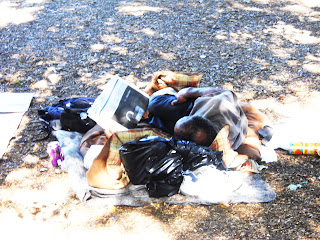