Another day full of being astounded by God's love! Today I joined with 7 Bridges Ministry, which is a really awesome ministry that goes either into the really bad areas (like abandoned houses and projects) or under overpasses to give food and hygeine kits to and pray for the people there.  I chose to go under the overpasses! We got to meet a lot of cool people. One guy that really stuck out to me was Bryan. He had such a good heart! He talked to us for a while and one of the things he said was, "Sometimes we get so educucated and so knowlegeable that we forget the simple things. Like love."
Bryan and I: 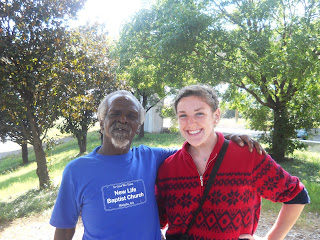 Praying under the bridges: 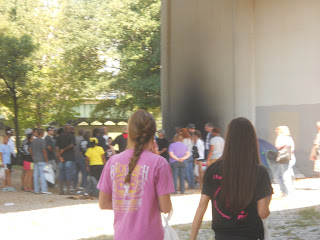 ﻿
After I was done with 7 Bridges, I was feeling like I might be getting sick, so I thought I might be done for the day, not because I wanted to be, but just because I wasn't feeling great. So I parked somewhere to get some water, but the parking meter was broken and there was a guy that was acting sketchy, so I got back in my car and figured I'd find somewhere else to get water, so I drove away. When I was driving to find somewhere to stop (keep in mind, I don't ever know where I'm going, I just drive until I find where I'm supposed to be), I passed a part of a bridge that I had stopped at a few times before. I love how I keep "just happening upon" this same place! So I looked over and saw some people. A part of me still wanted to just go find water and be done for the day. But God said, "Why would I bring you here if I didn't want you to feed these people?" So I was like, yeah, you're right. Even if I'm sick, these people still need fed, and I may be the only person to feed them. So I parked and took out my sandwiches and Bibles. And, as always, when God gives me something to do, no matter how I'm feeling physically or emotionally, if I say yes to Him, I always leave with my heart completely full!  I gave them all food and talked to them for a while. It was just a really sweet time. There were probably about twenty guys in this area. Usually when there's a group that size or bigger, not everyone will be receptive.  But every single one of the guys I went to in that area was not only receptive, but grateful! And as I was leaving, every single guy shouted out, "Bye!" or, "Bye, Tori!" and waved. All of the guys!  It was one of the sweetest moments I've had in Atlanta.  I love these guys so much, and I don't ever expect anything back from them. So when they show that they love me too, it blows my mind! It's hard to put a moment like that into words.  It's so much more than just some guys waving and saying bye. It's like separation was bridged and walls were torn down. Some of these guys build up a tough exterior in order to survive, so to have all the guys, even the tough ones, give a warm, sweet "goodbye," some even calling me by name, it was so beautiful. 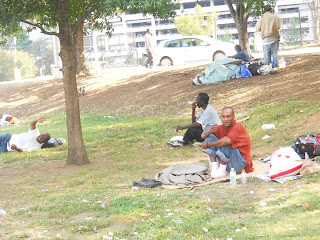