Today was so fun and refreshing! I started the day at Mercy, which was great. In Bible study we talked about Hebrews 2.  There have been a lot of deaths recently in the Mercy community, so a lot of the discussions have been on death, suffering, and grieving and how to deal with those things.  One thing we talked about was the fear of death. There was this one sweet lady named Dixie who talked about how she has relied on God for her strength in her 11 years of sobriety. She said something that was so simple, but so beautiful in the discussion of death. She said, "When He calls me, I don't hear 'death.' I hear, 'I'm going home.'" Another thing that we talked about today was how Jesus can have compassion because he became like us and suffered. One of the girls there said, "Mercy can't grow unless we're willing to become like our brothers and sisters. We trust those that are willing to walk with us." What she said applies to Jesus becoming like us and how we relate to others. Like Jesus, we need to humble ourselves and be willing to walk with out brothers and sisters, because when we do, we gain compassion and a trusting relationship is formed. And that's a beautiful thing.
I'm so blown away by how quickly I build relationships with these people. I value them so much, and they so appreciate the small things. One of the guys, George, that I talked to said, "We don't want a hand out, we want a hand up." Homeless people don't just want you to hand them food and walk away. They want and need to be encouraged, uplifted, and shown how valuable they are in our eyes and in God's. The small things, like jelly and having a hand written message on the sandwich bag, make a difference to them. Homeless men are smart, and when you give to them they can see when your heart's in it. How much more will your Heavenly Father know when your gifts are given genuinely or grudgingly? Giving grudgingly still feeds their stomach, which is a good thing, but giving genuinely and from the heart feeds their soul, which is so much more important and that fullness lasts so much longer!
After we got done serving lunch on the streets, the Mercy crew went out to sing on the streets. It was so fun! People driving by would roll down their windows and some would start dancing, it was great! Just singing about God and His love was so refreshing!
Yeah, my djembe playing would qualify as nothing more than a joyful noise! 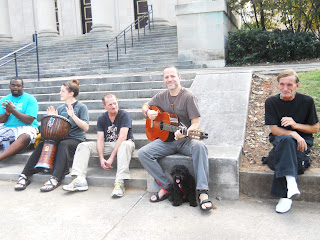 I love the Mercy crew! 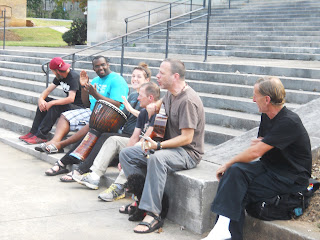 One thing that was so awesome today was I went to a little grassy area near some bridges, and when I gave one guy a sandwhich, he said, "Are you Tori?" and I said, "Yeah!" and he gave me a thumbs up and said, "Keep it up!" haha, that was so touching and encouraging! I guess I'd met some of his friends before, but it was so cool that in such a huge city, he knew me before I'd met him. It shows that you really can make a difference, because when you share love, the people you share it with pass it on. Another encouraging thing was I met a girl named Renee, and she told me that she read the message, "Draw near to God and He will draw near to you," and she told me she is going to pass that message on. Love has such a huge domino effect! Our reach is so much further than we know, we just have to be ok with sowing seeds of love without having to see the harvest. We can trust God with the harvest, it's just our job to sow and water like crazy!
Posted by Tori Long at 4:45 PM