Today was Shorty's 56th birthday! It was so fun, I brought him a little cake and gave out cupcakes to all the guys, it was such a good time! Nobody else would sing with me, but I sang Happy Birthday to him and gave him a card and a little foam bed cover that I had in my car! The card that I gave him was actually a Thank You card, because that's all I had. But like I wrote on the note, a Thank You card was still appropriate for him, because I am so thankful that God brought us together and I was so blessed by the words he said to me. And I'm just so blessed by getting to know Shorty!
Celebrating Shorty! By the way, guess what. This picture was taken by a homeless guy, and I still have my camera! They aren't all scary criminals like so many people want to believe! 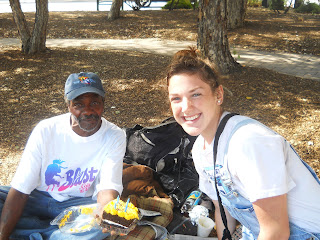 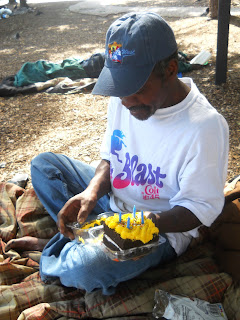 So today was just a really fun day of celebrating Shorty and having a good time. My sandwiches go so fast in Atlanta! There's so much ground to cover!
I guess I'll go back and tell about Monday now! Monday was awesome! I started the day at Mercy Ministries. They start the day off with worship, prayer, and a Bible study. It was such an awesome time of fellowship! Those guys had so many good things to say! After Bible study, there was a writing class, which was really cool. Not that many people participated, but the ones that did were awesome! The prompt was to write about what gifts you have and how you can share them.  Ivan wrote this awesome piece about how he doesn't have anything of materialistic importance. But he has love, and that's enough. He talked about how most tangible gifts that he's recieved don't really last. But the gift he gives is his heart and his love, and those can't be lost, broken, or run out. His writing was so poetic and so true!
After writing class, we all went out to feed on the streets. I think it's so cool how the people that eat breakfast at Mercy help to give out lunch on the streets. We're all equal! There's no separation between volunteers and the homeless, because we're all just people!
After I left Mercy, I went out and handed out sandwiches and hung out with people. Then I went to Bethel again, which was awesome again!
So yeah, my time in Atlanta has been so amazing! I'm meeting so many awesome people and getting to do things I never could have planned out for myself!
Posted by Tori Long at 2:02 PM