We are not less than sparrows.

Another day full of love and God's perfect plan! We served breakfast and lunch at ENCM, so the day started earlier, but was so good! So many loving people! And the occasional crazy that thinks God intended for us to only ever eat marijuana, and if we don't then it will result in us all eating each other. Yeah, I really don't know how he came to that conclusion. I've never eaten marijuana, and somehow I've never craved human flesh, so his theory is kind of off. But hey, God loves the crazies, too! I seriously can't think about that without laughing out loud. How did he come up with that?!
Anyway, after I left ENCM, I was going to go park and go into my usual area, but I searched and searched, but couldn't find anywhere to park. So, not knowing where I was going, I just kept on driving. I had no plan, but as always, when I don't have a plan, God's comes through. I eventually drove up to Nashville Rescue Mission, and then it made sense why I couldn't find parking: God wanted me to serve there. I walked in and talked to the director and asked how I could serve and he told me that I could either serve there, or at their location for women and children. I decided to go to the Women's Rescue Mission to serve.  I had a little extra time before dinner started, so I went to my usual spot to give out sandwiches, and I saw my buddies Rodney and Ray! 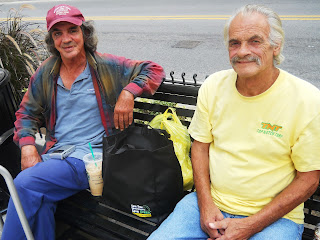 It's so fun seeing familiar faces on the streets! I was really proud of Rodney, though! He told me how earlier that day he wanted to go get some whiskey, but then he stopped and said to himself, "Turn around, what are you doing? You don't need no whiskey!" and he went to Starbucks and got himself some coffee instead! It made me so happy, I felt like a proud mama! And then there was sweet Ray! He was my first official goodbye of Nashville, because he's leaving in the morning to go stay with his family in Alabama. He's such a sweetheart, I absolutely loved my time with him! Before I left, he gave me a hug and then had me write him a note in the Bible I gave him. It was the sweetest thing. I can see that Ray has had a change in his heart, and it's so awesome!
My good friend, Ray! 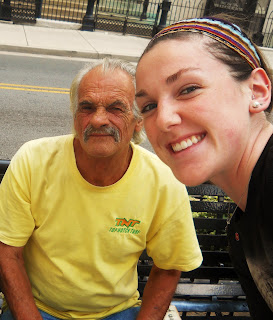 Then I went to the Women's Rescue Mission.  It was tough to see little kids in there, growing up with that as their normal.  But it was good to get to serve those women and kids.  The meal went by really quickly, but after the meal I got to have a really good conversation with a woman named Kate who is a part of the Hope Center, which is the Mission's Rehab program.  Today Kate is 100 days sober!! I was so proud of her! We just got to talk to each other about God and how He restores us and He desires our love and for us to have a relationship with Him.  That conversation was so encouraging, I know meeting Kate could be the only reason I couldn't find a parking space!
After I left the Rescue Mission, I went back to ENCM because a church was hosting a revival there. I ended up not staying for the revival, but I talked to Juan and got to hear his testimony. Juan isn't perfect, but God has changed him so much! Knowing him now, it's really hard to believe that he was the person that he used to be! He used to be violent and angry, and he did some things that he now knows weren't right at all. But now he is such a loving and protective person.  He takes care of the people on the streets, and he's there for them and offers them hope.  Juan has had friends offer a couch or a bed in their home for him to sleep on, but Juan knows that a lot of the homeless depend on him. Some are physically weak and need his help, some just need the emotional support that he offers. So Juan turns down their offers, because he knows God placed him with these people for a reason, and they still need him.  Juan does work hard. He works in the kitchen at ENCM every day for at least seven hours, but he doesn't get paid for it. And he's ok with that, because he knows he's helping people that need him.  Many people may call him crazy. He's homeless and he works every day without pay. Most people would tell him to stop wasting his time volunteering and go get a job that actually pays so he can get his own place. So he can be comfortable. People would tell him to look out for himself.  In fact, I kind of wanted to tell him this at first. But then I realized, Juan's got it right.  Nowhere in the Bible does it say, "Look out for yourself and make sure you're comfortable." God tells us to take care of the least of these. And Juan does that, not just giving them his spare time after he's got himself taken care of, but devoting all his time to them, because he know God has him there for a reason.  And he never worries about how he's going to make it because, as he often says, "We are not less than sparrows." (Matthew 6:26).
I'm so amazed how God is giving me so many beautiful relationships and wisdom from these people. I am so blessed by them! And He's guiding me to all the right people, even when I have no clue where I'm going! I'm so blessed and happy!
﻿
﻿
﻿
Posted by Tori Long at 9:18 PM