Today had some really good, happy moments, and a lot of hard, heartbreaking moments.
I worked at ENCM again today, which was good as always! Ribs were donated, so that's what we made for lunch, and word must have gotten out, because it was packed today! After cooking, feeding, and TONS of dishes, I got to do what I really enjoy: hanging out with the guys.
Today Maurice, aka Piano Man, came in! He's pretty popular not just at ENCM, but through Nashville! He let me video him playing!
By the way, if you're wondering why I don't have more pictures or videos, I'd really like to, but I can't video/photograph everything out of respect for the guys. Not all of them are comfortable with being on camera.
I got to hang out with Paul, too! Paul's the drummer of the group. He always has drumsticks, and he's always drumming! He's such a funny guy, always happy and always willing to help. One awesome thing about Paul is the fact that he can pull things out of his pockets for days! He has so many random things, but they all mean something to him. His most treasured trinket is a little figurine he calls Homie. He's had this little thing for thirty years! When he was showing me Homie, he said he just found it laying in the street and he picked it up because, "One man's trash is another man's treasured posession." Later when I was driving home thinking about Paul and his Homie, God told me that's how he sees these people, the homeless. The world sees them in the street and writes them off as worthless trash. But God sees them, picks them up and dusts them off, and consideres them His treasured possession. He does that with all of us. We're all His treasured possession, no matter how dirty and beat up we are when He picks us up.
This is Paul: 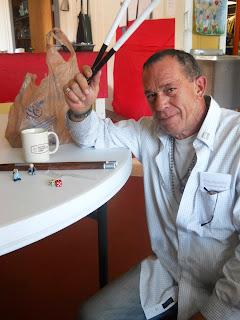 and his many treasures (Homie, Robot man, his old dogs' tags, a heart that reminds him of Valentine's Day which is when he was saved, a watch he's had for about twenty years, dice, and a drum key that belonged to Led Zeplin's drummer!): 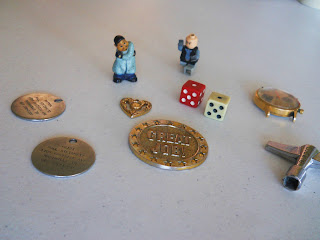 After I left ENCM, I went to Starbucks for some coffee and journaling before I headed out to find people. I sat down, and the guy at the table next to me, Strider, started talking to me. He told me that he was about to head to McKendree to serve dinner to the homeless, and I said, "Perfect! That's what I do!" So he invited me to go help. God just keeps showing me where He wants me!
There were a ton of people at McKendree, and I actually saw a lot of people there that I know through ENCM. It was so awesome to see familiar faces and get to talk to them in a different environment! When everyone had been served and most of the people were gone, we started cleaning up. It took us a while, and the whole time there was one lady left who was there way after everyone else was gone. Her name was Denise. Denise didn't have a big story, but she had a huge smile. She was the sweetest person I've met so far, so softspoken and tender hearted, and so sweet. I really didn't get to know much about her or her background, but from the short time I spent with her, Denise really grabbed my heart. We walked and talked for a while, and when we parted ways, I asked her if she knew where she was going for the night. She said she'd probably head to the park and find somewhere to sleep. As soon as we left each other I couldn't keep from crying. This lady who was sweeter than anyone I've met had to go find somewhere to sleep and hope she'd make it through the night safely. It's heartbreaking, I just want everyone to have a safe, warm home. The homeless aren't just things you see on the street, they're people. And when they become your friends, homelessness just breaks your heart.
And they really are becoming my friends. God showed me that when He brought me comfort through one of them. After I left Denise and I was really torn up, I saw my buddy Ray that I met yesterday and I sat with him. I was crying, and I said, "I just want everyone to have a home." He didn't say much to me in that moment, but he brought me comfort, just being there, being a friendly familiar face. Then he started talking to me about how he's doing better, and the things that are going on in his life. I love these awesome people!
After I left Ray, I met a guy named Memphis who's from Memphis and he actually spent time at the Union Mission, where I've served with Highpoint! It's such a small world!
Then I met a guy named Adam. Adam was a parking attendant that saw me giving out sandwiches and he started asking me about what I'm doing. I offered him a Bible, but he said he didn't want one because he's Muslim. Then he told me about himself. He's from Africa and became an orphan we he was four years old. He's one of the Lost Boys. He told me that when he was in Africa, he was always hungry and would have to sometimes go a month without food. He told me about one time when a Christian girl came and gave him food (noodles) and how he would never forget that because it meant so much to him. Because when you're that hungry, it's the worste feeling. When you're hungry you don't know what you're doing. He said, "So what you're doing- asking people if they're hungry and giving them food- that's everything. I know, I've been hungry."
Guys, impacting people is really simple. It's as simple as a peanut butter and jelly sandwich. The other day a guy gave me knucks, just because the sandwich had jelly on it! It was awesome! That little thing means so much. And my friend Rodney, he couldn't stop thanking me just for listening to him. I don't want any of you guys to think I'm doing something special or out of the ordinary. I'm just loving people, meeting one of their basic needs, and listening to what they have to say. It's so easy, you can do it wherever you are. And trust me, you'll never regret listening to these people, they have so many awesome stories and things to say! We all need to learn to see people's hearts instead of their social status. Let's ask God for His eyes.

Some of the ENCM kitchen crew: 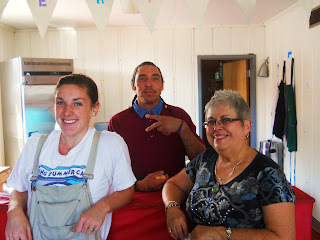 Some of the guys from Nashville Korean United Methodist that I served with at McKendree: 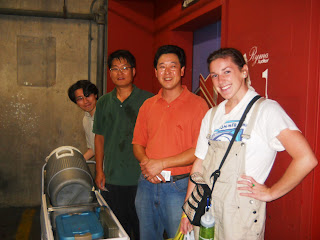