My time in Fresno is ending, but it has been so great! I love all of the people I've met, homeless and homed!
Today when I went out Eric was awake, so I got to hang out with him again! I got to see a lot of other familiar faces, but I haven't seen Melissa or Martha since my second day here.
One thing God does that I love is the way that when I'm out and I meet a lot of people that are dealing with really dark issues, he always ends the day with people that are full of joy! He never lets me end the day on a sad note! Toward the end of my day today, I was around a lot of people that weren't really doing well. There was one woman, Connie, who deals with a lot of anger issues and mental issues. Then I met a woman who says she is becoming a preacher. She told me that she is trying to help some of the people get off the streets and she takes them to her house to let them eat and shower. All of that sounded great, but then she told me about how she ministers to the homeless by bringing them beer and drinking with them and sometimes giving them weed. I didn't really know what to say, and she really did think what she was doing was best. So I just prayed with her and asked Holy Spirit to guide her in her own life and to bless her in her ministry and show her how she should go about helping the homeless.
After being around sad and twisted stuff, I went to one area near a bridge and got to hang out with Don, Troy, Condor, Calvin, and Leah! They were such awesome, joyful people! They invited me to play a game with them and we chatted and got to know each others' stories. It was a great end to my time in Fresno!
This is Don, Condor, Troy, and I! 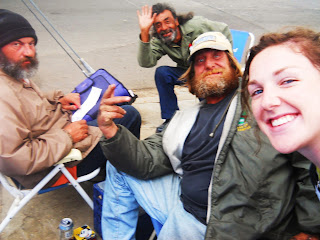 Another super sweet thing that happened today was when I gave Ben a Bible. It was so beautiful! I could see how hungry he was for God; as soon as I gave it to him, he left the group, sat down, and started reading. I could tell that he had a reverence for it that a lot of people don't. He didn't just treat it like another hand out like a lot do, he really valued it and saw God's word as precious and important. Ben was such a sweetie and I just pray that Holy Spirit brings the Word to life for him and I know God is going to bless his hunger for more. 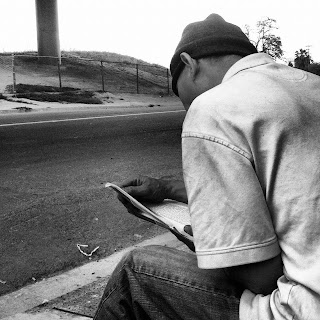