A rainbow stick and some colorful people

Today was such a fun day filled with awesome people! I'm so, so happy to be back in the swing of things after my Bethel break! I went to the same area today that I went to yesterday, but I didn't go down all the same streets.
I hung out a long time with Eric today, which was such a blast! I met him yesterday, but we didn't get to really talk. Today I got the chance to hang out in his "living room" and talk and have fun with him and some of his friends, Brown and Free Daddy. The three of them were SO funny and had so many stories to tell! Eric was super open, as opposed to a lot of people who tend to be more guarded or territorial, and he let me check out his tents and even take pictures of the inside! He had two tents, one for sleeping and one for just hanging out. Between the two tents was a living room area, which is where we hung out, that has a little fire place made from cinder blocks. The homeless' homes in Fresno are really creative, I've been super impressed! I met a few girls, Melissa and Martha, who live in a homeless home made of tarps and random plywood, that actually has multiple rooms that their friend put together!
This is Sommer, Eric, and I! 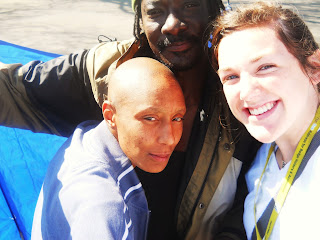 This is one of Eric's tents and part of the living room: 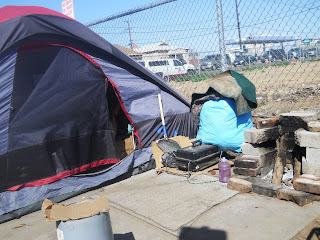 This is the inside of that tent: 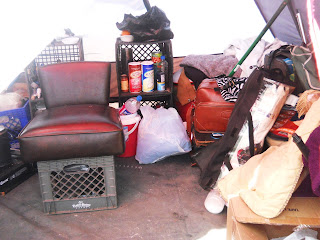 And this is the inside of his sleeping tent: 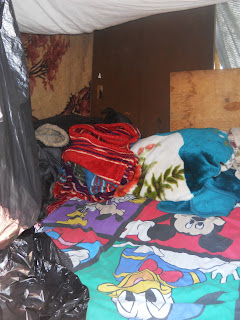 It was exciting to get to check out his tents, I felt like I was getting the inside scoop! Eric is such a sweet heart and so open and inviting! Both Free Daddy and Brown talked about how if they ever have anything going on, Eric is always the guy they come to talk to. And I see why! Eric and I talked about some deep stuff, but also some funny stuff! He's hilarious! He had a stick and a sling shot that he had made and painted rainbow to use as protection. The rainbow stick as protection I guess from any unwanted intruders, and the sling shot as protection from squirrels who steal his cookies, which happened the other night! Eric is so awesome! He can make you laugh and make you think, but either way, when you're with him he makes you feel like you're with a friend! '
Another person I really got to talk to today was Melissa! She was really sweet! She gave me the scoop on the area. We talked for a while and she ended up telling me that she had a college degree and a nursing license. Even though she doesn't work at a hospital anymore, she hasn't stopped nursing! Even while I was there with her, another woman came by to have her check on an injury she had.
Today was so fun! I loved getting to spend time in their community today, and I'm excited to head back out tomorrow! God is so good!