I'm in Redding now! My time in San Francisco was so good! On my last day out, I got to say goodbye to all my friends, and I was pleasantly surprised because I even got to see Randolph again! He moved to another park, but didn't like it, so he came back on my last day. It was so good to get to see him again!
One thing that was exciting and unique about my time in San Francisco was I gave my first haircut ever! It was so fun! Keith's hair was pretty long and he needed a haircut, so he asked me to do it for him. I told him I'd never cut anyone's hair before, but he said that would make it fun. So the next day I brought some scissors and cut his hair! It actually looked pretty good for my first one! So now I can add hair styling to my list of things I have to offer my homeless friends!
This is me and Francisco! I saw Francisco every day, but we didn't really have a good talk until my last day. He actually had a home and lived with his family, but they kicked him out pretty recently because of his drinking habits. It was fun talking with him, and he gave me a mini Spanish lesson (even though I forgot it all already) but it was a blast! 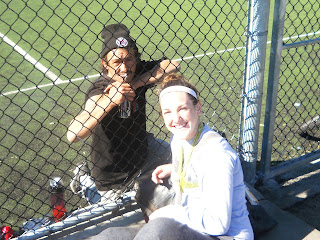 So yeah, I absolutely loved my time in San Francisco! It was so great, so fun, and I met so many awesome people! Now I'm in Redding, and I am soaking up my time at Bethel! It's been so good so far and I'm really excited about the week!