I had another great day! I didn't get to see Cricket again and all her stuff was gone today, so I think she must have moved on to another place. Maybe I'll still get to see her again before the week is over!
But I did get to talk to Randolph again today, and he was doing so well! It was great to see him so encouraged! He got an address so he can move forward with getting his social security. He's moving out of that park today, too, so I might not get to see him again. But I loved that I got to leave him on a good note, seeing him doing so well and having such a positive attitude! He talked to me about his plans for this summer. He wants to get out of the city and go camp in the mountains instead of the streets. I think that will be so good for him! Randolph is such a great guy! He talked about how he's come out of a destructive lifestyle and he's a Christian and he wants to live a better, healthier lifestyle and not go back to that stuff. I know Randolph is going to be okay, I know there's no reason to worry about him!
I also got to talk to Keith for a long time today! I had met him once before, but we hadn't really talked that much. But today we talked a lot! Keith had so much anger and frustration built up. He talked a lot about how much has been stolen from him and how much corruption he sees around him. He was just so angry, and like a lot of people I've met, after ranting for a while he brought up something about his family background. That happens with so many people that I meet. They have all this rage against everything and everyone around them that seems to be coming out of nowhere, but then it comes out that they're still holding onto pain from their childhood and being mistreated or rejected by their family. Family issues seems to be a huge common denominator for so many of the people I meet on the streets. Sadly, so is having issues with corruption in the church. But I kind of just sat there and listened to all Keith had to say. I felt like God was saying to me that that was enough, I didn't need to feel pressured to have any answers for anything he said. So I just listened to everything he had to say about everything. After a while he kind of got a little calmed down. He said that talking to me helped, and sometimes you just need somebody to listen, so you can get it all out so you don't explode. I'm glad I got to be that for Keith today. I mean really, a lot of these guys don't have anyone they can really talk to, either because they have to be tough around the people they're with or because the people they're with are struggling enough on their own and don't want to talk about anyone else's problems. So I was glad Keith got to get some of that out today, I could tell how desperate he was to have someone he could talk to that would just listen to him. Keith is one of the people I've met that most obviously desperately needed the peace of Christ. When I was about to go out, I asked Keith if I could pray with him before I left, and he said yes. It was one of the most amazing prayer times. I started praying and I just said to God, "I'm not going to try to think of what to say, You just let me pray over Keith whatever he needs and let me say whatever he needs to hear." So it was so cool to just get to pray the peace and joy of the presence of God over Keith. It was beautiful, and after the prayer Keith's demeanor was changed. I absolutely love that when Holy Spirit makes a visible change in someone just in a few seconds of prayer. After we prayed, we hung out and talked for a little while longer. And he gave me a hat, which was really sweet! When I was leaving, he said, "Thanks for the prayer. It was good, I felt it." That was so awesome! I love Holy Spirit!
This is me and Keith! I love him, he's so awesome! 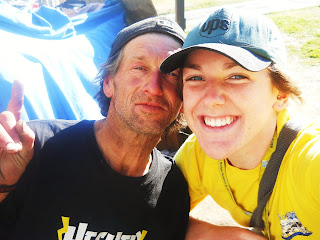