I'm in the first city of my second loop: St. Louis! It's been great so far, I really love what I'm doing!
Before I start talking about what's been going on in St. Louis, I have to post a picture of Evalene, the sweetest lady ever that I met on my last day in Birmingham right before I left. 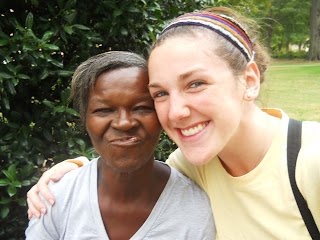 I love Evalene so much! If I wasn't travelling this year, I probably would have taken her home with me! If I had, I don't think we ever would have stopped just telling each other how much we love each other, because that was about half of our conversation! She is so loving and affectionate, I felt like I had known her forever, and we only talked for about half an hour. My favorite thing was she would just look at me, hug me, and say, "I just love the hell out of you!" Jesus already did that, though!  I could not not post about Evalene, though, not only because I love her so much, but after I took this picture with her, she told me to show all my friends!   So here is sweet Evalene, I wish everyone could have the privilege of getting to meet her!
My first few days in St. Louis, I didn't go to any organizations, I just went out on my own and handed out sandwiches and talked to people. Yesterday I went to the St. Louis Dream Center for the first time. It was really fun! In the morning I worked in the food pantry stocking shelves and walking people through to shop. Then I served lunch in the kitchen.
After I served at the Dream Center, I went on my own again to find hungry people to feed and talk to.  I met this beautiful lady named Sabraleah. I gave her some sandwiches and a bunch of other stuff, and one thing I gave her was a Bible.  A lot of people that I meet already have Bibles, so before I gave it to her, I asked her if she had one already, and she said no. She seemed kind of curious, so I asked her if she'd read the Bible much before. She said a little bit. I asked her if she knew about Jesus. She said not much. It was so different than what I'm used to. Most of the time, the people I meet tell me about their favorite Bible characters and they talk to me about how they rely on God, but Sabraleah was the first person I met that didn't even really know Jesus. She was such a beautiful, soft spirit, and so valued, I just wanted her to know how loved she is! So I told her about God and how he loves us so much and is our Father, and I told her about Jesus and how he died so that we don't have to be separated from our Father anymore. Then I asked her if she wanted me to read some of the Bible to her, and she said yes. So I read Ephesians 1 and Romans 8 to her. I just want these people to know how loved they are. I hadn't been to the part of the park that I met her at before, but I'm so glad I did that day!
This morning I went back to the Dream Center and we went out into the really poor neighborhood and went door to door and talked with people and gave them flowers and pastries. It was so fun!
Here are some of the kids I met Davion, Isaiah, Asiana, and their brother who came out for the picture! 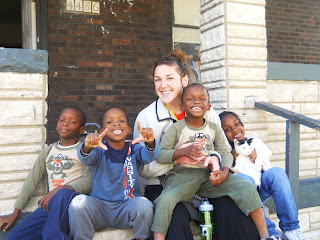