Today is my last day in Birmingham! It's been amazing, and I'm going to miss all my new friends!
I can't believe it's the last day of my first loop! It's gone by so fast and it has been so fun and life changing. I've been so blessed by this trip!
One thing that amazes me is how sharing these people are. These people who have so little are willing to give up what they have for someone else in need.  Everywhere that I've been with the homeless, if someone asks for a cigarette, they share.  If I give someone my last two sandwiches, they will willingly give one or even both to someone else that didn't get one. They have so little and are so sharing, yet we who have an abundance of things we don't even need are so stingy. We're afraid to give to people because we don't want to run out of things for ourselves. So we live with our hands clenched tight over our money and material possessions. Yet these people that already have nothing are so willing to pass things on to others in need. It's so backwards! It's because these people really get it. They value life more than things. They know, like Juan said, "We are not less than sparrows." God is going to take care of us, so we can afford to share with others. He sees our needs, and it makes Him sad when we are so stingy with our money or when we want to hold on to our things, because that says to Him that we don't trust Him to take care of us. He's our father and He wants to take care of His children! And He wants His children to share with each other. It's something every parent has had to go through, teaching their children to share. Nobody thinks it's cute when a toddler snatches a toy and says, "Mine!" Nobody thinks it's cute when a toddler wants to keep all the toys to itself while another child has nothing to play with. So why do we think it's acceptable once we're adults? Daddy doesn't want His children to be stingy like those greedy toddlers that don't want to share their toys. It's unattractive! And if we're all honest, sometimes when we see kids like that, we automatically judge the parents. We see the child's behavior as a reflection on the parent's poor disciplining. So when the world looks on God's children, don't make them see a bratty, greedy toddler that makes them think less of the Father. Show them a child that cares more about the needs of others than their own needs. Show them a child that finds joy in giving to others. Show them a child that truly reflects the Father's hear. It really is a joyful thing to do! Giving is joyful! Giving is fun! Giving brings a smile to God's face, and the more you love God, the more He will give you His heart, and the more giving will make you smile! It's a beautiful process!

This is sweet Chuck! 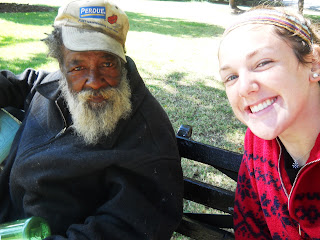 Herbert! Ah, Herbert was such a little angel! He has such a gentle persona and is so appreciative! 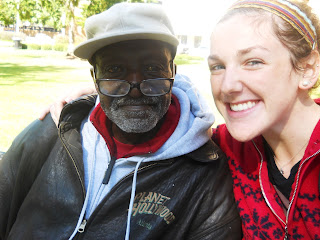 Fredrick and his Honey Buns he requested! 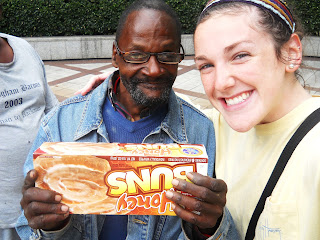 These people make me so happy! I love all the friends and sweet children God has blessed me with. He's increased my family so much this month! All my host families, the people I've worked with in ministries, and the homeless people I meet on the streets all have such a special place in my heart and they really have become a part of my family! These people keep growing my heart more than I thought possible! I love them all so much and I love my Daddy so much! I love how He showed that since we're all His children, I can't look at anyone and see a stranger, all I can see is a brother or sister who maybe doesn't know who their Father is yet.