I'm still having fun in St. Louis! Saturday night I ended up serving at Peter & Paul's, a homeless shelter. The guys there were really sweet! I handed out towels and helped serve dinner. While I was in the office handing out towels through the window, there was a man in there being interviewed because it was his first night. Peter & Paul's is a 90 day shelter, not just a walk in shelter, so when new people come in they have to be asked a lot of questions and have paperwork filled out. I overheard this process going on, and one of the questions was, "How long have you been homeless?" and the guy's answer was, "Since yesterday." That shocked me, because most of the homeless people I've met have been homeless for quite a while. I can't imagine that first day of homelessness: going from living in your own home one day to an old building full of a bunch of strangers the next, having to follow rules and schedules, and being fed meals that someone else decided on. The loss of a home is the loss of privacy and choices, and the initial adjustment has got to be one of the hardest things these people have gone through. But this particular man was so sweet and such a soldier! He still had a smile on his face and was really respectful, appreciative, and pleasant. I think most of us would be bitter, sobbing messes if we were in his shoes!
Here are some of the girls that I served with at Peter & Paul's! They were so sweet and fun! 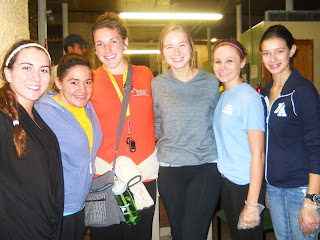 Last night I went to a park to give out sandwiches and hang out, and when I got there I saw Sabrahleah! I was so excited! So I sat down with her and we started talking, and then I looked down and at the end of the long bench we were sitting on, and there was Donna, who I had met the day before sitting outside of Starbucks! She's a really cool girl, she's from Australia and hitch hiked there for a while and she's in college here studying Jazz. You meet such awesome people when you talk to strangers!
Sabrahleah, Donna, her friend (I'm pretty sure his name is Herbert), and me at the park! 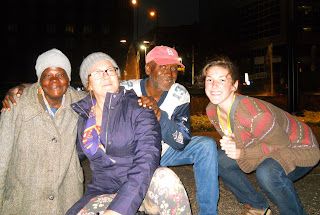